Quake this – The Boobquake Phenomenon and Feminism

So I recently stumbled upon an event called Boobquake and couldn’t resist the extremely current discussion of feminism.

Begun by Blaghag blogger and fellow Boilermaker Jen McCreight, Boobquake is a worldwide Facebook event in which anyone (especially women, but McCreight later included men) can dress immodestly on Monday April 26, 2010 to rock the world off its axis with boobs.  Yes, boobs.

McCreight explains the impetus for Boobquake on her blog, saying:

This little bit of supernatural thinking has been floating around the blogosphere today:

“Many women who do not dress modestly … lead young men astray, corrupt their chastity and spread adultery in society, which (consequently) increases earthquakes,” Hojatoleslam Kazem Sedighi was quoted as saying by Iranian media. Sedighi is Tehran’s acting Friday prayer leader.

I have a modest proposal.

Sedighi claims that not dressing modestly causes earthquakes. If so, we should be able to test this claim scientifically…. Time for a Boobquake.

Listen to CNN’s coverage of Hojjat ol-eslam Kazem Sediqi‘s earthquake comments here and BBC’s coverage here.  The BBC story gives a better context for the comments by describing Iran’s decade of devastating earthquakes.  CNN’s story states that Sediqi is a senior cleric who was appointed last year by Supreme Leader Ayatollah Khamenei as a substitute Friday prayer leader in Tehran, an extremely influential position.  His views on promiscuity and immodesty and their connection with natural disasters are also shared by American televangelist Pat Robertson who “suggested that January’s devastating earthquake in Haiti was because of a pact Haitians made with the devil in order to throw off French rule in the 18th century.”

Also, the connection between women’s sexuality and natural disasters/terrorism/the apocalypse has a long history and is still very relevant.  Just read any Susan Faludi book, or more specifically, her recent book on the attack on women’s sexuality after 9/11.  I could talk for days about this – another blog, another time.  Back to Boobquake.

Although Boobquake will assuredly never amount to a movement of plate tectonics, the event has resulted in an explosion of worldwide participation as well as a heated debate over feminism.

The Boobquake Facebook event page currently has more than 86, 000 confirmed guests and has grown exponentially since it’s inception last week.  McCreight has also been interviewed on CNN (story here).  The event and blog post garnered so much attention that McCreight issued “a quick clarification about Boobquake” on her blog specifically about issues of feminism and the sexual objectification of women:

I just want to apologize if this comes off as demeaning toward women. To be honest, it started as silly joke that I hurriedly fired off since I was about to miss the beginning of House. I never thought it would get the attention it did. If I would have known, I would have spent more time being careful about my wording.

That being said, I don’t think the event is completely contrary to feminist ideals. I’m asking women to wear their most “immodest” outfit that they already would wear, but to coordinate it all on the same day for the sake of the experiment. Heck, just showing an ankle would be considered immodest by some people. I don’t want to force people out of their comfort zones, because I believe women have the right to choose how they want to dress. Please don’t pressure women to participate if they don’t want to. If men ogle, that’s the fault of the men, not me for dressing how I like. If I want to a show a little cleavage or joke about my boobs, that’s my prerogative.

I also hate the ideal of “big boobs are always better!” The cleavage joke was just a result of me personally having cleavage, and that being my choice of immodesty. And I thought “boobquake” just sounded funny. Really, it’s not supposed to be serious activism that is going to revolutionize women’s rights, but just a bit of fun juvenile humor. I’m a firm believer that when someone says something so stupid and hateful, serious discourse isn’t going to accomplish anything – sometimes light-hearted mockery is worthwhile.

Anyway, I’m not forcing anyone to agree with me. Maybe I am failing at Feminism 101, or maybe I’m just taking a different approach.

When I first decided to “attend” Boobquake, I, like McCreight, didn’t even think about the complex feminist response (and like McCreight, I’m a big whoppin proud young feminist).  I did come across Beth Mann’s insightful response to Boobquake which provides a counter feminist perspective on Boobquake.

Her title, “Why I won’t be joining the ‘Boobquake‘: A racy feminist protest against extremist Muslim misogyny quickly devolves into ‘Girls Gone Wild,'” says it all.  Her article, originally appearing on her Open Salon Blog, states that the event has turned into “‘male-friendly’ feminism” and poor body image for women: 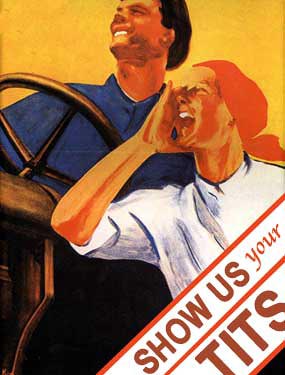 I appreciate McCreight’s intentions behind this; she meant it as a feminist response to a ridiculous statement. Unfortunately, it seems to be turning into something else, with many men chiming in, with their “show us your tits” camera-ready attitude. Women on parade again … sigh. Since when did we “stick it to the man” by wearing low-cut shirts or short shorts? When women burned bras back in the day, there was a statement there, full of boldness and righteous anger. This type of happening feels like feminism lite, “cute” feminism or “male-friendly” feminism.

Reviewing the hundreds of comments that continue to pour into the Boobquake Facebook page, many women apologetically replied, “Sorry, I don’t have enough cleavage to show” or “I’m as flat as a board … sorry!” A movement that encourages more body issues! Yay for us.

Women should be able to wear what they want. That’s a given. Women should be able to sexually express themselves how they see fit. Of course. And underneath it all, I guess that was Boobquake’s intention. Unfortunately, we live in a world that sees that kind of freedom of expression as a photo opportunity or another cheap thrill. All parties must be on board and in celebration of the cause in a way that doesn’t include lasciviousness, latent female hatred or sexual over-saturation. If not, then all we’ve got is “Girls Gone Wild” with a cause slapped on it.

I agree with Mann, that while Boobquake is a fantastic feminist proclamation of women’s sexuality, it can easily be misrepresented as “Girls Gone Wild” with a cause slapped on it.  In fact, it reminded me of a report I saw a year ago that still haunts me – a vegetarian strip club in Portland, Oregon called Casa Diablo.

As a feminist vegetarian I’m horrified at the combination of using women’s sexuality to sell animal rights, and especially equating women with “meat.”  However, far unlike McCreight, this strip club’s anti-feminist motives were intentional.

So where does that leave us?  I, personally, will not be baring my breasts as part of the Boobquake Revolution on Monday, April 26, despite my support for McCreight and her motives.  Instead, I will be wearing a sticker in protest that says, “My sexuality or body do not result in natural disasters.”  Many of my friends will be participating, however, and I’d love to hear everyone about their thoughts on Boobquake and their experiences.  Most of all, I’m just excited to talk about feminism.

3 responses to “Quake this – The Boobquake Phenomenon and Feminism”