Happy 4th!  I’m still recovering from my weekend of little sleep, grilling out, and eating lots of peaches.  I miss it all already.

Here’s what’s been brewing over the weekend:

In his book, Michael Billig coined the term “banal nationalism” to draw attention to the ways in which nationalism was not only a quality of gun-toting, flag-waving “extremists” (p. 5), but was quietly and rather invisibly reproduced by all of us in our daily lives.

So, what’s the problem with banal nationalism?  Sociologists have critiqued nationalism for being the source of an irrational commitment and loyalty to one’s nation, a commitment that makes one willing to both die and kill….  [Read on]

A few months ago I read about encouraging advances in the science of male contraception. That led me on a long search to speak to the leading minds in the field.

As readers know, I had a vasectomy several years ago. But I have several buddies who are either on the fence about wanting kids or don’t want them right this second. So, for those guys, I wanted to ask these scientists: What’s taking so long? [Read on]

Georgia is having mixed results with a new program replacing migrant farm workers with probationers.

Republican Gov. Nathan Deal started the program after farmers complained a crackdown on illegal immigrants was scaring away the mostly Latino workers needed to harvest labor-intensive crops like blueberries and cucumbers.  (This article sparks a plethora of conversation points – worker’s rights, prisoner’s rights, the value of migrant work and the claim that migrant workers take jobs from US citizens, and the intersections of class, race, and ethnicity to name a few.) [Read on]

“The moment when something is transformed into something else is the most beautiful moment; it’s a magical moment,” said Brazilian artist Vik Muniz in the 2010 Oscar-nominated documentary Waste Land (in Portuguese, “Lixo Extraordinário”), directed by Lucy Walker, João Jardim and Karen Harley.

The movie tells the remarkable story of how the “catadores,” scavengers of recyclable materials found in an enormous landfill on the outskirts of Rio de Janeiro, are coached by Muniz to transform mountains of discarded items into breathtaking works of art….[Read on]

Watch the documentary Wasteland on Muniz’s work.  Check out the trailer here or watch the film on Netflix.

NPR also has a few more articles on the project.  Check them out:

(Thanks to Good for sharing.)

I think this project is both inspirational and interesting – a nice reprieve from the death wishes that have saturated the media since last week. 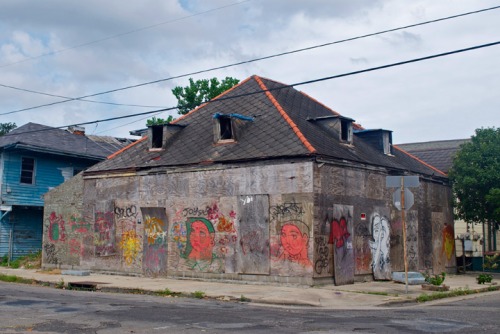 Continually cleaned and rewritten, the board artistically bridges the past and present by weaving together the wishes, both concrete and abstract, of differing incomes, races, sexualities, genders, ages, ethnicities, religions, and education levels (and possibly nationalities): 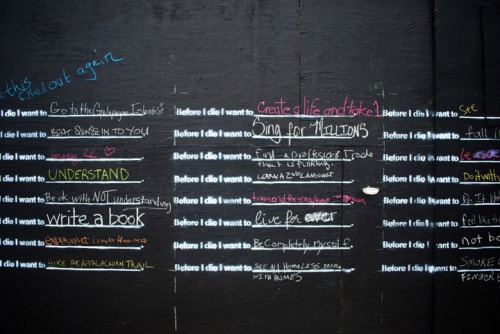 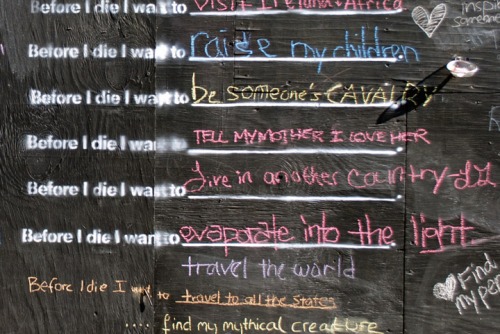 What’s so endearing about the project is how, despite all our differences, at the end of the day “feed an elephant” and “do a cartwheel” are both on my bucket list, despite being most likely written by eight-year-olds.

If I could be in New Orleans, I would add the following to the bucket list:

Eat a slice of rainbow cake 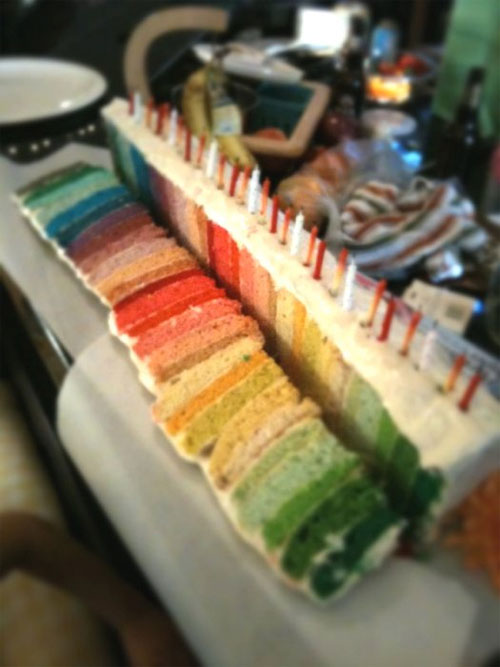 Acquire a micro pig and name it Clover 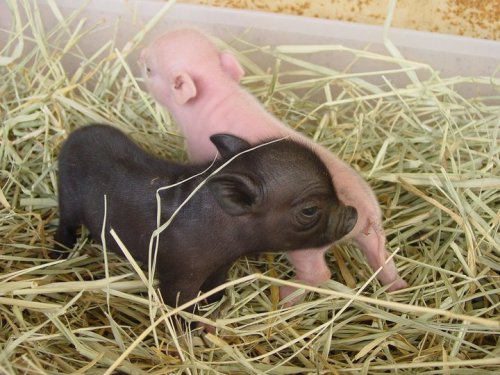 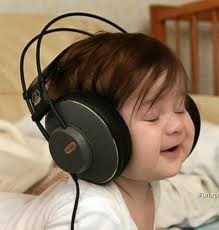 What would you add?

This post is from Sociological Images.  Art by Sebastian Errazuriz.

These are just the juicy women’s history segments of the story.  Read the entire article here.

This is a fascinating discussion of gender politics and design.  The MoMa now has its very own kitchen – dismantled in Frankfurt, Germany and reconstructed in New York – in its new exhibit, “Counter Space: Design and the Modern Kitchen.”  Although the gunmetal gray leaves much to be desired, this exhibit argues that women were politically active about their own rights through kitchen design.

Author Robert Smith states, “But through one of the first architecturally designed kitchens, you can see the ideas that launched a million home remodeling projects: built-in bins, undercabinet storage, pullout drawers and a four-burner stove.”

“For centuries, really, the kitchen had been ignored by design professionals, not least because it tended to be lower-class women or servants who occupied the kitchen space,” says curator Juliet Kinchin.

“The kitchens were often poorly ventilated, shoved to the basement or annex, and caused a lot of drudgery in the kitchen.”

It was women who led the reform of the kitchen into an efficient space — one to be proud of. Kinchin says, “they were trying to adopt a scientific approach to housework and raise the status of housework.”

“The designer of [The Frankfurt Kitchen], Grete Schuette-Lihotzky, was passionately concerned about the quality of women’s lives,” Kinchin continues. “She felt without sorting the drudgery they were involved in, they’d never have time to develop themselves in a professional way.”

Although these advancements did relieve the “drudgery” of housework, they essentialized wives’ work by isolating them to the kitchen.  And ads to sell these new gadgets and contraptions conveyed that cooking and hostessing would make [young, white, middle-class] women better wives and better women.

The exhibit features a lot of industrial movies from the ’20s through the ’50s, which make it clear that once you let designers into the kitchen, they don’t know when to stop. Architects weren’t just creating kitchens; as it turns out, they were also designing the perfect housewives to go in them.

In a corner of the exhibit, there’s actually an architectural drawing of a woman with all her dimensions clearly marked. Her name is Josephine.

“She’s the 5-foot-4 incarnation of the average American woman, life-size,” Kinchin says. “This is what interior designers and architects worked with when they were designing the dimensions of the modern kitchen.”

The designers obviously felt designing the perfect kitchen was liberating for women — but not all women agreed.

“Schuette-Lihotzky did make women’s lives a lot easier,” Kinchin says, “but she has been criticized by feminist critics in the 1970s for actually isolating women in the kitchen.”

A few weeks ago I joined my pals Louisa and Erin in The Windy City for a day of adventures.  Our first stop, after hitting up Chicago Raw at The French Market for a raw muffin that is to die for, we headed off to the Field Museum!

Louisa (left) is a feminist playwright and Erin (right) leads afterschool Girl Scout programs. Are we not a bundle of feminist-fantastic!

One of my favorite exhibits was The Romance of Ants which explores how one girl got into the male-dominated field of studying ants.

The exhibit, based on the life of Field Museum scientist Dr. Corrie Moreau, contains about 20 graphic novel panels drawn by aspiring entomologist and graphic artist Alexandra Westrich.  Although the focus of the exhibit is on ant education, the exhibit empowers young women to study perceived masculine subjects of science and math.

Here are a few of the panels in the exhibit which demonstrate the exhibit’s feminist slant: 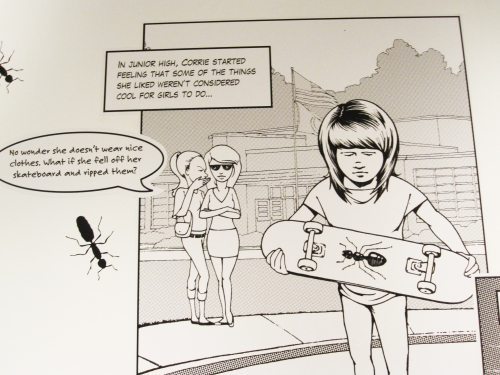 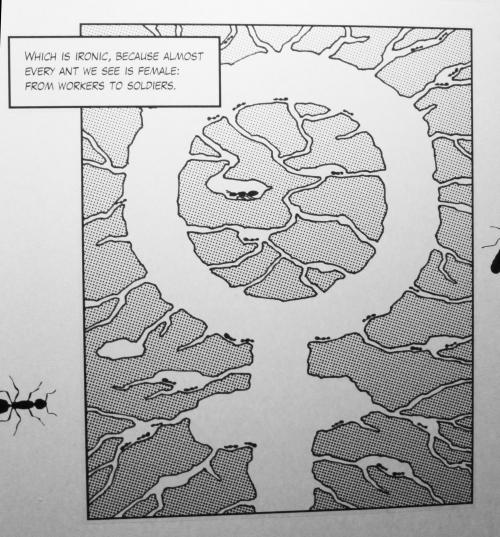 Despite ridicule from other girls, Moreau made her way into the study of biology. 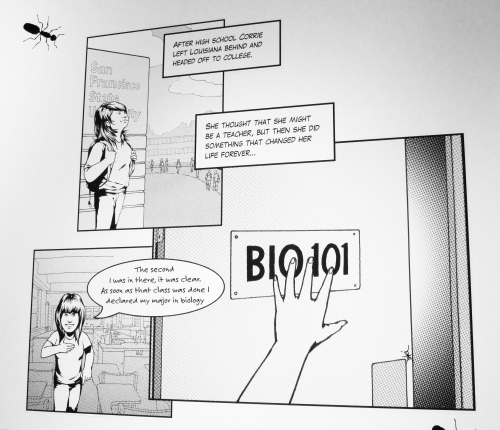 After years of pursuing this “manly” subject, Moreau has still managed to maintain her femininity – ah!  shocker! – and proceeds to get married before finally working at the Field Museum.