Photos by Stephanie Sinclair, as part of her co-authored project in National Geographic, “Too Young to Wed.”
Listen to her interview with Michele Norris at NPR here.
Also, see her photo essay “The Bride Price: In Afghanistan some daughters to be married are just children” in the New York Times Magazine (see the third page – it is precious).

“I strongly believe there is not just a need for awareness-raising and prevention work, but we must find ways to help these girls who are already in these marriages — be it through giving financial incentives to their families to let them stay in school, or vocational training so they can have more say in their lives and households. Quality medical treatment is also needed for girls who are giving birth at these young ages. These girls need long-term solutions. There is no quick fix.”  (Sinclair) 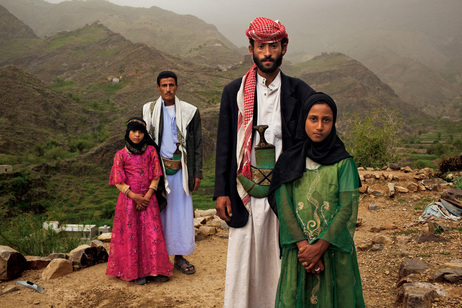 Stephanie Sinclair/National Geographic "Whenever I saw him, I hid. I hated to see him," Tahani (in pink) recalls of the early days of her marriage to Majed, when she was 6 and he was 25. The young wife posed for this portrait with former classmate Ghada, also a child bride, outside their mountain home in Hajjah, Yemen. 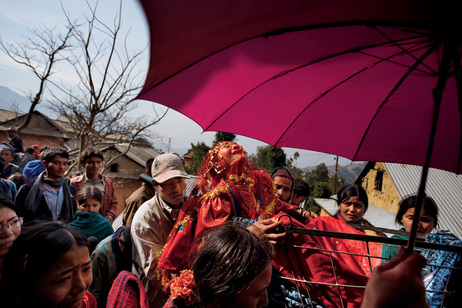 Stephanie Sinclair/National Geographic Although early marriage is the norm in her small Nepali village, 16-year-old Surita wails in protest as she leaves her family's home, shielded by a traditional wedding umbrella and carried in a cart to her new husband's village. 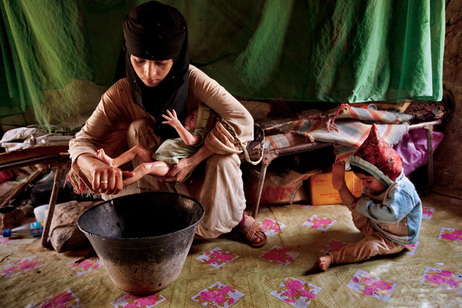 Stephanie Sinclair/National Geographic Asia, a 14-year-old mother, washes her new baby girl at home in Hajjah while her 2-year-old daughter plays. Asia is still bleeding and ill from childbirth yet has no education or access to information on how to care for herself. 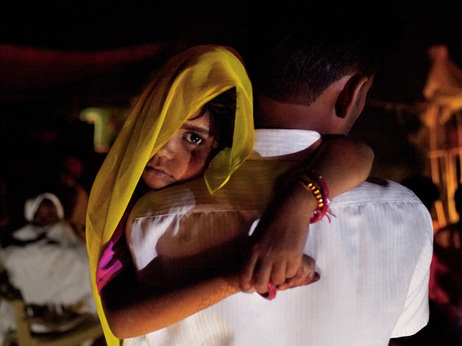 Stephanie Sinclair/National Geographic Long after midnight, 5-year-old Rajani is roused from sleep and carried by her uncle to her wedding. Child marriage is illegal in India, so ceremonies are often held in the wee hours of morning. It becomes a secret the whole village keeps, explained one farmer.

Sexual assault as justice for protest has been around forever, but when I heard this story I was reminded of Chana Kai Lee’s biography of Fannie Lou Hamer, For Freedom’s Sake.

After protesting for African American civil rights alongside other SNCC members, Hamer and others were taken into jail and brutally beaten and sexually assaulted by police and prison staff.  Hamer’s beatings in jail left her with a limp, blind in her left eye, with her kidneys permanently damaged (listen to her speech before the Credentials Committee at the ’64 Democratic National Convention here).

Here, however, the tactic was presented as a “precautionary” measure rather than the demeaning and sexually objectifyng act it truly was.

And think Egypt is the only one doing virginity tests?  Think again.  Try Britain and India.  And really idiotic young American boys.

From Shahira Amin at CNN > Read the whole story there.

Cairo (CNN) — A senior Egyptian general admits that “virginity checks” were performed on women arrested at a demonstration this spring, the first such admission after previous denials by military authorities.

The allegations arose in an Amnesty International report, published weeks after the March 9 protest. It claimed female demonstrators were beaten, given electric shocks, strip-searched, threatened with prostitution charges and forced to submit to virginity checks.

At that time, Maj. Amr Imam said 17 women had been arrested but denied allegations of torture or “virginity tests.”

But now a senior general who asked not to be identified said the virginity tests were conducted and defended the practice.

“The girls who were detained were not like your daughter or mine,” the general said. “These were girls who had camped out in tents with male protesters in Tahrir Square, and we found in the tents Molotov cocktails and (drugs).”

The general said the virginity checks were done so that the women wouldn’t later claim they had been raped by Egyptian authorities.

“We didn’t want them to say we had sexually assaulted or raped them, so we wanted to prove that they weren’t virgins in the first place,” the general said. “None of them were (virgins).”

This article gets at some core issues about the racial and ethnic stereotyping of Asians in films.  The only thing I would add is the stereotype of the spiritually wise Asian (Victor Wong in 3 Ninjas, Splinter in Teenage Mutant Ninja Turtles, the Buddhists in Ace Ventura Pet Detective: When Nature Calls…..)  Expect a blog post soon about the Orientalism in Eat Pray Love. 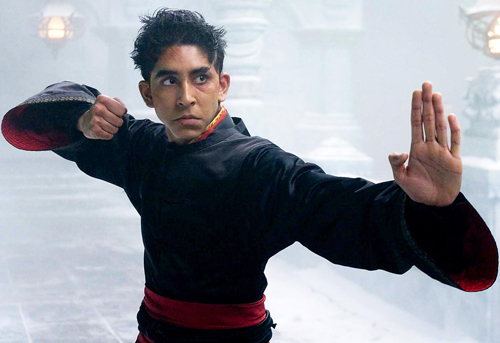 Dev Patel in The Last Airbender, Photo by Paramount Pictures

Hollywood is institutionally racist, according to Dev Patel, the Slumdog Millionaire star, who claims Asian actors are limited to roles as terrorists, taxi drivers or geeks.

When the film about the Mumbai slums became the surprise hit of last year, winning eight Oscars, it was expected that Patel’s career would take off.

But the 20 year-old from Harrow, north-west London, has been frustrated by the lack of decent roles on offer and is currently jobless.

“Because Slumdog was such a big hit, there was a lot of pressure in terms of what I did next,” he said. “For my second film, I wanted a role that would stretch me, but all I was getting offered were stereotypical parts like the goofy Indian sidekick.

“Asian actors tend not to be sent Hollywood scripts that are substantial or challenging. I’m likely to be offered the roles of a terrorist, cab driver and smart geek.

“I want to show that I have versatility. You have to remember that, before Slumdog, the last film about India that went big at the Oscars was Gandhi, as played by Ben Kingsley. The fact that me and Freida have any kind of platform in Hollywood is a big step forward.”

Freida Pinto played Patel’s love interest in the film and is now his real girlfriend. The Indian-born former model has had more success than Patel, winning a role in Woody Allen’s latest film.

But he said he hoped to overcome any prejudice. “I’m buzzing with adrenaline and raring to go, but I have to be realistic. Being an Asian actor, it’s never going to be easy. Hopefully the industry is changing and the casting directors will be less focused on colour so that people like myself can get through the door.”

Patel was plucked from the relative obscurity of Channel 4’s teenage drama, Skins, to make his film debut in Slumdog Millionaire. Directed by Danny Boyle, it became a box office success and won the best picture Oscar.

The film Patel chose for his second role has been mired in accusations of racism. The Last Airbender is based on a children’s television cartoon in which the main characters are Asian. The pounds 100?million Hollywood adaptation, released in Britain this week, has white actors in the leading roles while the Asian actors – including Patel – are limited to playing villains.

When the film premiered in America last month, there were protests at the cinema.

The actor still lives at home with his parents and travels on public transport. He said: “One time I was on the Tube and I picked up a free newspaper. Inside was a big article with the headlines, ‘Dev Patel, the new rising star’ along with a picture of me. This woman got on and started reading the piece. She looked up at me and did a classic double take.”

Facebook users in India are being urged to make themselves appear whiter online, as part of a marketing campaign by a skincare company.

Vaseline has launched software to promote its new skin-whitening cream, which promises to reduce five types of dark face spots.

Facebook users are asked to download a programme or app, which will then similarly adjust their photographs.

Having lighter skin is considered an asset in parts of India.

It is being called “Snow White syndrome” in India, a market where sales of whitening creams are far outstripping those of Coca-Cola and tea.

Pankaj Parihar of Omnicom, the advertising firm behind the campaign, told the AFP news agency the response to its “Vaseline Men” cream “has been pretty phenomenal”.

The Vaseline Men Facebook page has more than 500 fans, who also receive grooming tips such as this:

“Don’t shave for a day or two and let the stubble grow in rakishly. Combine this with sunglasses to look utterly mysterious, rakish and thoroughly attractive.”

But not all users approve. Ember Rayne Hulett from Virginia in the US writes that “Black is Beautiful. You don’t need a cream to be cool”.

As with the Indian economy as a whole, the skin-whitening industry is growing like never before, and is now worth billions of dollars.

Most products, such as Fair and Lovely are aimed at women, but men are being targeted as well by lotions like Fair and Handsome.

Ravi Raj Narula, the owner of a cosmetics shop in central Delhi, said his customers include men from the villages surrounding the Indian capital.

“Earlier it was only the ladies who were interested, but now many young boys and men also want to have a fairer complexion,” he said.

“Maybe it is because of the impact of the Indian film industry because traditionally the heroes and heroines have been shown as white-skinned people.

“Or maybe it is a legacy we inherited from the Britishers when they left India?”