Why “Eat Pray Love” Should Make You Want to “Eat, Shoot and Leave”

I thought this review was hilarious.  Even though I’ve never read the book, I strongly dislike movies in which white people are enlightened by non-white people, and, in turn, try to save those non-white people.

Loop 21 discusses the dangers of “color blindness” in these “white-people-as-savior” films:

Hollywood has been perpetuating this “master narrative” for over 100 years — the fact that without whites, blacks will never reach their full potential in life or in society. Really.

While many people know this story and some may have lived it, the fact is that this is the exception and not the rule. Black folks spend plenty of time saving themselves from systems of oppression that are so intrinsically linked, that life on planet Earth can appear daunting to many and hopeless to others. The fact remains that African-Americans have a history of resiliency and determination that is unmatched in this country.

Why is Hollywood so invested in telling this other story over and over to the point of exhaustion, while clearly ignoring the norm, which is Black folks pulling together to make something out of nothing?

Hollywood’s love affair with black people with or without athletic ability, that need saving from themselves, continues. This love affair is only trumped by audiences that reinforce this problematic narrative by flocking to films that continue to profit from this disingenuous storyline.

This happens a lot in American movies: 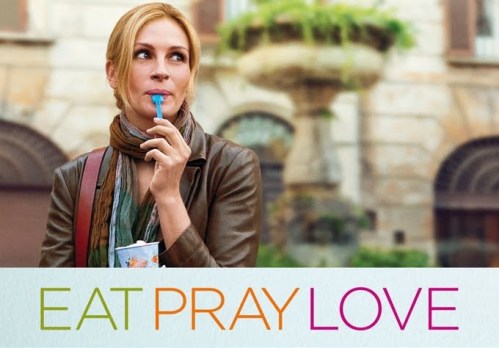 In the NPR article, “Eat, Pray, Love, Leave: Orientalism Still Big Onscreen,” author Mia Mask includes the film in a list of recent movies which romanticize travel along the Silk Road.  Some plots like those in Syriana, Body of Lies, and the new Prince of Persia “rely on the stereotype that the East is someplace timeless, otherworldly, incomprehensible.”  While other films like Eat Pray Love and Sex in the City 2, rely on the stereotype that “the East is waiting to be discovered by Westerners in search of self.”

“‘Orientalism’ is the term academic historians and literary scholars like Edward Said have used to describe this age-old pattern of depicting Middle and Far Easterners as primitive Others.”

This essay, written by Sandip Roy and originally published on AlterNet, gets at the implications of exoticism and orientalism in the film Eat Pray Love.

For the longest time, I thought the 2006 bestseller “Eat, Pray, Love” was a sequel to the 2004 bestseller about punctuation “Eats, Shoots and Leaves.”

I confess I never read Elizabeth Gilbert’s bestseller except for browsing through a few pages in a copy sitting by a friend’s bedside. I enjoyed the writing. The story of picking yourself up after losing your way has universal appeal even if we all can’t afford to recharge under the Tuscan sun.

It’s not Gilbert’s fault, but as someone who comes from India, I have an instinctive reflex reaction to books about white people discovering themselves in brown places. I want to gag, shoot and leave.

The story is so self-involved, its movie version should’ve been called, “Watch Me Eat, Pray and Love.” In a way I almost prefer the old colonials in their pith helmets trampling over the Empire’s far-flung outposts. At least they were somewhat honest in their dealings. They wanted the gold, the cotton, and laborers for their sugar plantations. And they wanted to bring Western civilization, afternoon tea and anti-sodomy laws to godforsaken places riddled with malaria and Beriberi.

The new breed is more sensitive, less overt. They want to spend a year in a faraway place on a “journey.” But the journey is all about what they can get. Not gold, cotton or spices anymore. They want to eat, shoot films (or write books), emote and leave. They want the food, the spirituality, the romance.

But as her character complained that she had “no passion, no spark, no faith” and needed to go away for one year, I couldn’t help wondering where do people in Indonesia and India go away to when they lose their passion, spark and faith? I don’t think they come to Manhattan. Usually third-worlders come to America to find education, jobs and to save enough money to send for their families to join them, not work out their kinks.

This is not to say “Eat, Pray, Love”– now a major movie in a theater near you – just exists in a self-centered air-conditioned meditation cave and has no heart. But it requires more than the normal suspension of disbelief when Julia Roberts announces she will eat that whole pizza and buy the “big girl jeans.” We see her trying to squeeze her Julia Roberts body into her jeans, struggling with the zipper and we know this is a fine, brave actor at work.

She tries not to be the foreign tourist but she does spend an awful lot of time with the expats whether it’s the Swede in Italy, the Texan in India or the Brazilian in Bali. The natives mostly have clearly assigned roles. Language teacher. Hangover healer. Dispenser of fortune-cookie-style wisdom. Knowledge, it seems, is never so meaningful as when it comes in broken English, served up with puckish grins, and an idyllic backdrop. The expats have messy histories, but the natives’ lives, other than that teenaged arranged marriage in India, are not very complicated. They are there as the means to her self discovery. After that is done, it’s time to book the next flight.

But all through the film this is what I was wondering. Why was she drawn to those three countries? Why Italy, India and Indonesia?

Is it because they all start with I?

Not inappropriate for a film that is ultimately about Me, Myself, and I. I travel therefore I am.

Nothing drove that home better than what happened after the screening ended. I went down in an elevator crammed with radiant women, all discussing when they teared up during the film, and how much they related to it, and its message of opening yourself up to the world. There was one woman in a wheelchair in the elevator. After we reached the lobby, the women, still chattering, marched out into the chilly San Francisco night. The woman in the wheelchair remained stranded behind the heavy doors.