Boy has it been a weekend!  Let’s get you caught up on some interesting discussions:

I was never really into Harry Potter, but for some of my friends and family members, this is the end of an era.  I, however, can’t wait to share some of these adventures and their heroines and profeminist heroes with my children.

“Hermione offers much for a generation of girls to admire, beginning with her unmatched, encyclopedic knowledge of spells, potions and magical history, which is crucial to Harry’s survival throughout the series. She also holds her head high in the face of attacks on her appearance (she catches flak for her frizzy hair and her large teeth) and her stigmatized status as a Muggle-born witch (her peers taunt her with the slur “Mudblood”). Her loyalty and devotion to her best friends keep the golden trio–Harry Potter, Ron Weasley and her–together until the very end. It’s no wonder fans have serenaded her as the ‘Coolest Girl in the whole wide world’…” [Read on]

I have too many interesting articles to share with you and so little time.  So, in honor of the snowcalypse in the Midwest, here’s a blizzard of fabulous things to read.  Choose your poison:

WESTLAND, MI – JULY 6: Hannah Rose Akerley, age 7, of Grosse Point Park, Michigan, gets some relief from the heat by playing in a gigantic lake of mud at the annual Mud Day event July 6, 2010 in Westland, Michigan. The lake was created by mixing 20,000 gallons of water with 200 tons of topsoil. The event, which is sponsored by the Wayne County Parks Department, draws about 1,000 children each year. (Photo by Bill Pugliano/Getty Images)

Young people are coming out in full force to fight for democracy, and women are at the forefront of these protests, breaking a huge stereotype that Muslim women passive, voiceless or apathetic.

THIS PICTURE IS SO BADASS!!!

Beauty and the Double Standard of Aging – Sociological Images

Today I had the pleasure of reading a 1978 essay by Susan Sontag titled The Double Standard of Aging. I was struck by how plainly and convincingly she described the role of attractiveness in men’s and women’s lives: “For women, only one standard of female beauty is sanctioned: the girl. ”

Brisenia Flores, Another Nine-Year-Old Girl, Was Shot and Killed in Arizona – Village Voice

Brisenia Flores, 9, was killed on May 30, 2009, when a group led by anti-immigration fighter Shawna Forde raided the girl’s family home in the border town of Arivaca, Arizona. Allegedly, the attack was organized in the name of the Minutemen, a crew of vigilante border patrols, who hoped to steal money and drugs to fund their revolution against immigration. The Flores household was attacked mistakenly, for they had no drugs or money, but according to reports, Forde and her cronies commenced to shoot Brisenia’s father in the head, killing him, before wounding her mother and eventually, shooting Brisenia in cold blood…

We broadcast from Park City, Utah, home of the Sundance Film Festival, the nation’s largest festival for independent cinema. One of this year’s selections that is creating a lot of buzz is a documentary called The Black Power Mixtape. The film features rare archival footage shot between 1967 and 1975 by two Swedish journalists and was discovered in the basement of Swedish public television 30 years later. We speak with renowned actor and activist Danny Glover, who co-produced The Black Power Mixtape.

It’s a wonder that the security guards at the Academy of Motion Picture Arts and Sciences didn’t stop Mo’Nique and make her show ID when she arrived to help announce the Oscar nominations early Tuesday at the organization’s Beverly Hills headquarters. After all, she was the only person of colour involved with the extravaganza, since the 83rd annual Oscar nominations have the dubious distinction of being an all-white affair…

I’m not sure if I buy the argument that Dexter is feminist, but that could be because I’m still on season 4.  The show does, however, highlight the sexual relationships of its female characters (Deb, LaGuerta, Lila, the various prostitutes…).  What do you Dexter fans think? 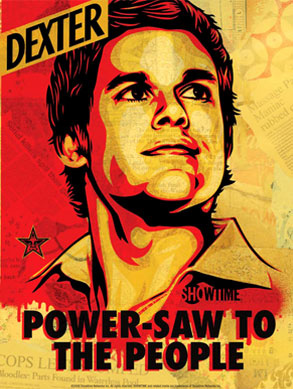 Dexter’s eye-for-an-eye vigilantism came to a gripping fifth-season finale this week with Jordan Chase (Jonny Lee Miller), serial rapist and murderer, brought to a bloody end by one of his victims, Lumen (Julia Stiles). If you are not familiar with the show, go here for a good feminist overview of the series, or see the series of posts here.

This season, the Showtime TV series had much to offer feminist viewers: blood-spatter analyst (and serial killer) Dexter Morgan (Michael C. Hall) as single dad; female Lt. LaGuerta’s (Lauren Velez) betrayal of Dexter’s sister Deb (Jennifer Carpenter); Deb’s mad detective skills and, at the heart of the season, a rape revenge fantasy involving Dexter and Lumen, who were bent on meting out punishment for a group of male rapists and murderers. This time around, Dexter’s partner in crime was an intelligent, articulate, tough woman–a female raped, tortured and nearly murdered who realizes that the violence done to her cannot be buried or denied and will forever change her view of the world and her place in it.

As noted at Feminists For Choice, “the show does an above-average  job of accurately depicting the agony of rape trauma syndrome and PTSD.” Why is this good viewing for feminists? Yes, the violence is visceral and the blood excessive. The administered justice is very harsh–with murder on the agenda for those serial killer Dexter decides “don’t deserve to live.” But underneath its brutal exterior, the show also presents us with deeper moral questions about a legal system that consistently fails to catch or punish serial killers, rapist, and child abusers–and deeper still about what type of society breeds such violence and if, indeed, our legal system creates just as many criminals as it attempts to apprehend.

The calendar may say 2010, but for women ski jumpers it’s still feeling like the 1950s when men competed and women watched. Ski jumping is the only winter Olympic event that doesn’t have a female competition.

In October, the 12-member executive board of the International Olympic Committee (IOC) met in Acapulco, Mexico to consider adding new events to the 2014 Winter Games, which will take place in Sochi, Russia.  The wannabes include women’s ski jumping as well as ski halfpipe, ski and snowboard slopestyle and three coed events: biathlon mixed team relay, figure skating team event and luge team relay.

Blame it on the margaritas or maybe the sun, but the old boys couldn’t bring themselves to say “si “to the women ski jumpers’ request to join the Games. Instead, they said “wait and see.”

Jacques Rogge, the Belgian yachtsman who is the president of the IOC, insists that he needs more time to see if the sport has evolved. Perhaps someone should tell Rogge that ski jumping is older than he is: He was born in 1942 and women have been ski jumping since the 1920s. Women jumpers took a hiatus starting in the 1950s, however, when doctors said that the sport was too dangerous for them–that it might damage their female organs.  No one worried if the men jumpers, who wear thin lycra onesy suits, risk frostbite on their private parts.

It was hard to watch men’s ski jumping in Vancouver knowing that the women were on the sidelines and that a woman, Lindsey Van, held the record jump on the competition hill before the Games began. And it was hard to watch alpine ski racer Lindsey Vonn (with an o not an a) win a gold medal knowing that ski jumper Vann wasn’t allowed to compete. But it was especially hard to explain to my seven-year-old niece, whose mother was an Olympic rower, why the women ski jumpers couldn’t compete.  “Because their girls?” she asked.  That’s right, Zara, because they’re girls.  “That’s not fair,” she pointed out.

Jacques Rogge, are you listening?

Photo of Holmenkollen ski jump in Norway under license from Creative Commons 3.0.

Sorry, guys – no time for a real post today.  Why don’t you tell me what you think about the following posts from Ms. Magazine:

At first it seems like possible good news. Disney/ Pixar announces: no more fairy tales, code for princess movies. Great! No more damsels in distress who end the movie by landing a man.

Now we’re going to have a slew of new movies with cool girl heroes who bravely rescue boys from peril, exuding power and beauty by performing all kinds of risk-taking tasks and challenges. But, no.

First of all, the reason the fairy tale movies are stopping is because Disney/ Pixar executives have decided that little girls aren’t worth making movies for at all.

The Los Angeles Times reports the fairy tale movies “appealed to too narrow an audience: little girls. This prompted the studio to change the name of its Rapunzel movie to the gender-neutral ‘Tangled’ and shift the lens of its marketing to the film’s swashbuckling male costar, Flynn Rider.”

Can you imagine if Disney decided to shut down a genre because it only appealed to little boys? Or if they switched a movie title so it wouldn’t risk highlighting a male star?

The good news is that Disney’s new animated feature Tangled is funny, fast-paced and visually stunning.

The bad news is that it re-hashes the same old story: As a woman, you can either be a princess awaiting her prince or an evil stepmother/witch; as a man, you get all the action (in many senses of the word). And beauty, of course, equals white, blonde, thin and young.

Keeping in mind Disney’s recent announcement that after Tangled they won’t be making any more princess films, one can see Tangled as a transitional movie, an indication of where Disney’s future is headed…

To this end, Disney brought in a new directorial team in 2008 to overhaul the planned Rapunzel and “wring the pink out of it,” as the Los Angeles Times aptly put it.

The resultant Tangled, with a non-heroine title, more action and a platoon of mega-muscular-man characters (in contrast to only two key females–Rapunzel and the evil Mother Gothel), bodes ill for Disney’s post-princess era.  While one blogger has called this a “gender neutral makeover,” it seems to me more of a masculinist makeover.